V reviews - In this corner of the world: A better war movie than The Wind Rises

For the past two weeks, the Anima festival was happening in Brussels. Too bad I found out about it a little too late. Why? Because the festival had the first Belgian air dates for "Your Name", and I was just a little too late to get to see it.

But after biting away my disappointment, I found out there were still some tickets left for another anime movie that was recently released: "Kono Sekai no Katasumi ni", which is released in Europe as "In this corner of the World".

The movie information and trailer caught my attention. And since I totally missed out on Your Name, I wanted to double down on watching this film. So I drove to Brussels through the pouring rain, parked my car in the overpriced Flagey parking, sat down in these worn-out uncomfortable theater seats and watched it. But the end result made the entire trip worth it!

"In this corner of the world" is kind of flying under the radar in the west, since its name is not "Your Name", nor "Sword Art Online the Movie". But it is a movie that requires your attention. So let's review this and get the show on the road!

V Reviews - In this corner of the World 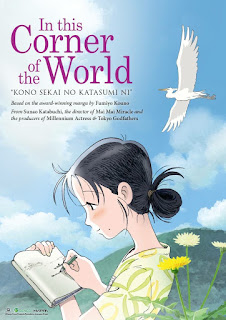 Her published works tend to be on the short side (1-4 volumes) and usually tend to be slice of life dramas. And since she was born and raised in Hiroshima, most of her stories are about the atom bomb and the aftermath of it. While she is too young to have experienced the bombing herself (°1968), she grew up in a city that has experienced this drama first-hand. This means that she has heard lots of first-hand stories from people around her. Family members, neighbors, everybody who lives in Hiroshima has their own story. And Fumiyo absorbed those stories and turned them into works of her own.

Until now, Fumiyo's most recognized work was "Town of Evening Calm, Country of Cherry Blossoms", which received several awards and was turned into a live-action movie as well (which also garnered lots of praise and awards). This story was about a family of survivors of the atom bomb.

"In this Corner of the world" on the other end is the story of a young woman that has to experience the hardships that the second world war brings to a family of common people. And once again, the manga has gained lots of critical praise.

In 2012, a project to animate this manga was first announced, but then postponed due to lack of resources. In 2015, a crowdfunding campaign was launched in order to help finance the project... and by god, it got almost double the requested money. Calling this a success is an understatement. 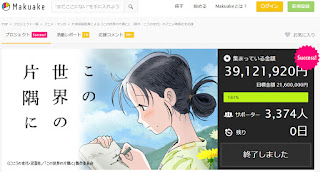 By October 2016, the movie was finally released in Japanese theaters. And now the producer is taking the movie all around the world, to show it at movie festivals.

And this movie adaptation is aiming to become a big success. Seriously, look at the Accolades of the wiki page. It's only been released for less than half a year and the list of awards already are too long to mention on a single A4 page. In the Japan Academy Awards, it even beat out films like "Your Name" and "A Silent Voice" in the category of best animated movie.

And this is just the beginning. I'm curious what it's going to do at the big Film Festivals (like Cannes, Sundance, etc), not to mention next year's Academy Awards (it will be nominated, mark my words).

The story of this movie portrays the life of Suzu, growing up from a kid in Hiroshima into adulthood. She's a dreamer and an talented artist. But most of all, she's an airhead with little to no care in the world.

But as has long been tradition in Japan, a young man (Shuusaku) asks for Suzu's hand to her parents and she is being married off without even seeing the guy once. Okay, she sees him once while being "disguised". 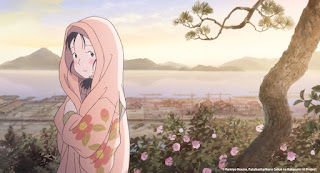 Master of disguise, everyone!

Shuusaku and his family lives in the harbor city of Kure, which lies in the south of the prefecture of Hiroshima. So Suzu has to move to Kure and shortly thereafter she has to marry the man (with a hilarious joke concerning the "marriage night" and umbrella's - you'll get it once you see it). 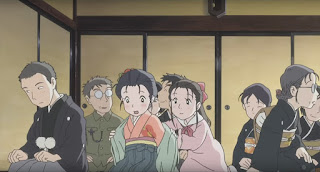 Wait, is she starting to strip...? During her wedding?

Suzu has to live in this new environment, while proving herself to be as useful as possible with this new family. And that isn't easy, especially when her sister-in-law (Keiko) returns home after her husband died early and Keiko got into arguments with her in-law family. In this process she had to leave behind the shop of her late husband (which was forced to close down anyway) and she had to leave behind her son with her in-laws (in order to inherit the family name, I guess?).

But while this setup of a movie would be somewhat stale, I didn't mention the name Hiroshima without it playing a pivotal role in this story.

Yes, this is wartime Japan in World War II and everyone somewhat falls victim to it.

Shops start to close down, food supplies are being rationed, black markets flourish, bomb shelters are being built, the military police is being suspicious of everybody and so on and so on. 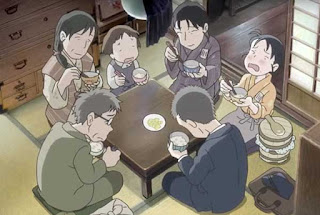 Yup, that's all that is left to eat today...

And while the majority of the movie consists of Suzu getting used to her new life, the second half of the movie starts to become more dramatic.
The moment you really feel you got to know the characters in this movie well, the war starts to creep in... really close.

Air raids become more frequent, people are being torn away (quite literally) and tears are being wept. Even Suzu herself is unable to escape unscathed.

This is only the beginning...

And after tragedy hits her really hard (no spoilers), she wants to return to her family in Hiroshima. All this while the movie makes sure to show you it's just a few days before the bomb is dropped...

The only thing you're wondering when all this drama starts, is if Suzu will make it out alive. But for that, you'll just have to check the movie out yourself.

There are more minor characters floating around in this movie, but less time is spent on them. These include Suzu's parents and grandmother, Suzu's "evil" big brother, Suzu's early boy-crush (Tetsu) and a few others.

This is really a well animated movie. It's animated by Studio Mappa, known for recent hits like Yuri on Ice, Rage of Bahamut, Kids on the Slope and Hajime no Ippo the Rising. If anything to compare it by, I think Kids on the Slope does come the closest. It uses a similar color palette.

The character design require some getting used to (they feel a bit chibi-like at times). But once you get used to the art style, you can get sucked into the movie.

Other than that, the environments are amazing to look at. It sometimes feel as if I'm looking at photographs instead of animated backgrounds. 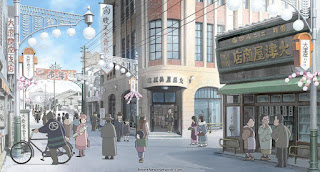 The music is created and performed by singer/composer Kotringo (Rieko Miyoshi), who has also received some awards for this score (which should say something about the overall quality). If you want a feel of what the soundtrack sounds like, take a look at the trailer.

One song that did jump out from the movie was the opening track, which is typical Western church music (kind of a weird choice). It's probably a coincidence, but I couldn't help but notice it.

This movie is adorable to watch, yet very captivating at the same time.

Yes, it does tend to drag itself a bit halfway through. But when the tension of the war comes, it really makes you live the emotions along with the people who are experiencing the tension.

And while the movie makes sure not to show too much of the bloody results of the war, the few times when war does chime close to our family, it really packs a punch. While I did not cry myself, there will be plenty of people who will be needing their Kleenex.

Also, the last 5-10 minutes are a bit weird. The movie does it best not to show too much of the war horrors that happened post the A-bomb (not unlike the infamous first few volumes of Barefoot Gen). But then there's suddenly a few scenes with a girl and her mother which are utterly disturbing and kind of misplaced in this movie. It comes out of left-field and has a big impact on the final moments of the movie. But it also makes you wonder: "Was that really necessary?"

But overall: Do I like this movie? Yes, Yes I do.
In fact, I find it to be better than The Wind Rises. The Wind Rises is the Oscar-winning Ghibli movie that is also a "slice of life" drama set in World War 2.

But I personally found The Wind Rises to be a bit boring. Yes, it has pretty visuals and it was Miyazaki's (supposed) last movie (now we know better!). But that's about it. Outside of the plane building, there's not much substance to that movie. The love story and drama is just mediocre at best. 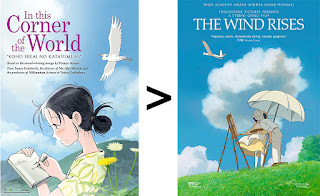 tl;dr? This review in one image

In "In this Corner of the World" there's so many things present that one part does not outweigh the other. It's a better overall experience and a must-watch if you want to learn anything about Japan during World War 2 and how living in Japan during the wartime was like.

Overall, I'm giving this an 8,5/10. If this movie plays in a theater or film festival near you, go and watch it! You will not regret it!

Email ThisBlogThis!Share to TwitterShare to FacebookShare to Pinterest
Labels: #konosekai, anime, anime review, In This Corner of the World, Kono Sekai no Katasumi ni, studio mappa