10 Summer 2017 anime you should pay attention to

After my huge posts of the Spring season, I found it necessary to refine my anime recommendation process. No, I'm not going to do another starting point blog post where I watch EVERY new anime of the season. That process is a little too draining for me.

Last season I watched 40+ first episodes of the new anime series and I quickly came to realize that most are just generic and bland. And if you ever want to get tired and annoyed of something you love, there is no better way than watch too many bland and generic shows.

BAD anime have something going for them. They can be meme machines (like Berserk 2017 or Eromanga Sensei), or can evoke discussion (ID-0). Good anime can have big followings (My Hero Academia, Boruto), can make you smile or emotional (Sakura Quest, Alice & Zoroku) or evoke thoughtful discussion (KADO). But mediocre anime? They got nothing.

So to avoid getting an anime bore-out, I'm only going to focus on these 10 new anime this upcoming season.


10 Summer anime to look forward to

Note: These are ranked in sequence of air dates, not in preference 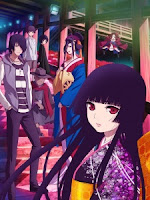 Movies to look forward to

I can't really put these two in my top 10 list, since it might take months or years before I get to see them. But the following movies will release this summer that do trigger my interest.

Mary and the Witch's Flower / Mary to Majo no Hana

Noteworthy mentions of which I haven't watched enough

That's it from me now. Until next time, V out.

When I decided that I would watch some of the most recent sports anime, the first one I decided upon was Haikyuu. Why? Because volleyball is a sport that has always had a soft spot in my heart. I always liked playing it in school and I think if I ever would pick up sports again, volleyball would probably be among my first choices. I dunno why, it's a sport that clicked with me.

So did this anime live up to my expectations? Let's find out 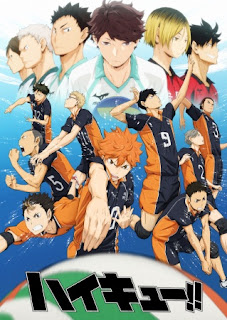 Haikyuu is a sports manga created by Furudate Haruichi. And this author is the polar opposite of the mangaka of Yowamushi Pedal (see my earlier blog post). Wataru has many public appearances and his image is publicly known. Haruichi on the other end uses a pen name and almost everything about him is unknown, safe the date of birth (March 7 1982 - yes, there's a typo on ANN's bio page).

The few things we do know is from the "about" section of the manga volumes and the general "mangaka comments" page of Shonen Jump. From this information I was able to filter out that:

It starts to make you think. How can an anxious person go and play a team sport like Volleyball? From my experience, the only way to do that would be to latch onto a friend you can trust. Like how the anxious Yamaguchi hangs with Tsukishima.

Hold on... Central blocker, anxious kid who hangs with best friend... Is Yamaguchi the personification of the author? That would make sense and it is a recurring thing that authors put their own persona in their own stories as a supporting or side character.

Well, it's only speculation, but let's call this my personal "Anime Theory" 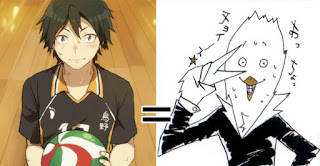 Since the author is a very anxious person, it was kind of to be expected that he doesn't have a Twitter account or blog of any kind. And I think it's for the better that fans don't try to pry any further into his privacy.

Anyway, back on topic. Haruichi started out in 2008 as a manga artist. And after a few short-lived series (King Kid, Playground & the horror manga Kiben Gakuha), he finally struck gold in 2012 with Haikyuu. The series has resulted in a tv-series of 3 seasons (at this moment), several recap movies, several OVA's and also a (Japanese) 3DS game.

Before going further, let's back up a bit. What exactly does the title "Haikyuu!!" even mean? Since Haikyuu is written in Katakana (reserved for foreign words), you can read it as High Queue or HQ. But reading it like that would miss the point completely, since the word "Haikyuu" is an advanced pun.

After watching the volleyball legend "The Little Giant" on tv, Shōyō Hinata is dreaming of becoming a volleyball star himself. But while his attempts to form a volleyball club in his middle school came with "mixed results" (they end up being beaten in the first round of the big regional tournament), he does not want to give up his dream. 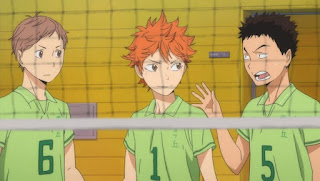 What do you mean, we lost?

So when needing to select a high school to enroll into, Hinata obviously chooses the school of "Little Giant", Karasuno High School. But when entering the volleyball club, he encounters the star player of the team that beat him in middle school, Tobio Kageyama. The two get in each other's hairs and annoy the other players so much as well as incidentally hurting the vice principal of the school, the team leader (Daichi Sawamura) kicks both of them out of the club.

The sole reason for letting them back in, is if they show they can work together as a team. And that is a bigger hurdle than the two thought. Hinata lacks good experience, since the only people he played with were girls or elder women; while Kageyama has some issues of himself, bossing around everybody so much that they stop trusting him (and in a team sport like volleyball that is deadly). But with due time and training, and with the help of the other team members the two slowly start to become better at working together. Hinata and Kageyama show they can work together by challenging the other first-year players to a match. And by winning against them, they're allowed back in the team. 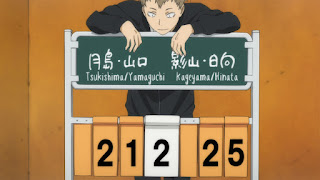 Once this rag-tag team has been formed, the school councilor sets them up a practice match against Aoba Johsai High school, which they somehow win (albeit that was due to the absence of the team's main setter for most of the match). But in order to prepare for the upcoming big tournament, they need to make sure some former players return, get an actual trainer and do a training camp. 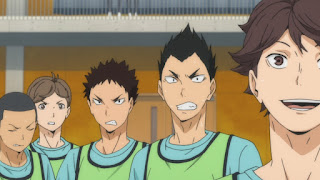 Interesting team, but we'll beat them next time...

And each episode will get you pumped for the next.

This anime has SO many characters. The main focus of this show is presenting each team with at least a handful of interesting characters (at which it succeeds). But it's karasuno's team that remains the most interesting...

But boy, I could go on for a while naming characters (SO many of them). Amongst the list of "others", the most notable characters are: Tōru Oikawa (setter for Aoba Johsai High school and rival to Kageyama), Kenma Kozume (setter for Nekoma high and friend/rival of Hinata) and Wakatoshi Ushijima (ace of Shiratorizawa Academy, and "main enemy to beat" in the regional tournament and thus the first three seasons).

Animation is being handled by Production I.G. and the studio has been pumping out the seasons on a steady pace. Season 1 was 2014, with season 3 airing past Fall of 2016. 2017 will have no fourth season. Instead, the studio is trying to comfort the fans with a recap movie and a special OVA instead.

The reason for that was quite obvious. The anime was catching up to the manga. That's why the third season was already shorter than the previous two. There has been no official message of when Season 4 will be done, but speculation is that the studio wishes for the manga to move a little further before they start animating it. Fans already have mentioned that the special training of Tobio (which is revealed at the end of the third season) itself could not contain a fourth season of 1 cours, by itself. So if a fourth season comes, it'll probably be 25 episodes again (like the first and second season).

In terms of quality, there's nothing to say in particular. Production I.G. is one of the most renown animation studios in the anime industry. There's a quality label attached to the name of the studio. Even if a Production I.G. anime doesn't do well, it's never because of the animation.

The music is composed by the young and talented Asami Tachibani. And if to be described in one word, it's: "Hype". Listen to tracks like "The Battle of Concepts" (for example) will get you pumped up and ready to play ball.

And the OP's try to do the same thing. They're animated to maximize the interest curve system to get your interest set up for the show to start. But hey, don't take my word for it. Here is Geoff from Mother's Basement explaining the Interest Curve system used in the Haikyuu OP.

This has been a VERY enjoyable anime to watch... and to binge watch especially. The longer you hang around these characters, the more you want to be with the characters. You feel the main characters' struggle to become better in volleyball.

And the show makes it clear that these are no superheroes performing supernatural sports performances. They fail to receive the ball, they f**k up passes, they hit the net when setting up and even lose matches. They get frustrated and annoyed after losing. They want to train harder, but don't always find the right way to be successful. And while reviewers who play volleyball have already commented that the stuff these characters do are feats that even Olympic athletes couldn't do (like constant triple blocking), it's still closer to reality than most sports anime (for example Kuroko's Basketball).

And best of all, the flow feels more natural, akin to the real sport. With that I mean that the distance people run and the duration of the passes are more aligned to our real world (unlike sports anime like Prince of Tennis or Yowamushi Pedal). There's only one episode in the first season where I caught them doing exactly that: A single pass lasting over 5 minutes (which I found hilarious). But I think they received complaints about that, because the creators never did something this stupid ever again.

But what sold it completely for me is the great sense of humor this series had. I was laughing my ass off due to the shenanigans our heroes and the other rival schools tend to do.

Personally, I'd give the three seasons together a solid 8.5/10. It's a really good anime. Can't wait for the next season!