Yeah, it's been a while since I posted anything on this blog. I have been busy with a project for work with limited internet access. And meanwhile at home I rediscovered how addictive Civilization V really is (answer: really addictive).

But I have been preparing a few blog posts, so I'll update frequently in the next few days (before I leave to Rock Werchter at least :-P).

Well, let's start with the latest.

Yesterday, we had a Battle Pack Sealed Tournament at our locals. Quite a few people showed up. There were 32 people present, which was more than usual for a Pegasus league tournament. But I guess the popularity of Battle Pack sparked the interest of many people.

We got 8 packs each (and 2 for price support, lol) and had to make a deck of minimum 20 cards.

Round 1: Versus guy that returned to the game after 7 years or so:

Beat him with some trouble (2-0). My beat sticks were strong, but hardly had effects, which I noticed is a downside. He was pleased with the learning experience from the match and I gave him some hints afterwards (he didn’t use cards like Book of Moon or Raiza the Storm Monarch). Thanks to the hints, he won the next three rounds, which was better than he ever expected (he was grateful for the help).

First game, I ended up with 8 of my 10 support cards in the first 10 cards I got from my deck. I ended up losing because I couldn’t keep any monster on the field. Not to mention, he MST’d my Solemn Judgment in both games. Second round was closer, but I still ended up losing. (0-2)

This player was good. But in both Games I won with a close victory. (2-0)

It was probably due to her crazy boyfriend next to her acting all weird, but she couldn’t focus on the game. She made several mistakes. I easily won 2-0.

Round 5: Guy whose name I forgot

This was the most exciting one and most memorable one. I might submit this to Konami’s come-back stories for Battle Pack.

First game, I won. Second game, he won (due to an early Solemn Judgment I used).

In round 3, his latest attack dropped my life points from 1900 to 400, while he had well over 5000 left. Next turn, I was able to use Raigeki to clear his field, even though I didn’t have any monsters. I set a Power frame and passed. His next turn, I used Solemn Judgment to stop his normal summon (down to 200). I pulled Reckless Greed and set it, hoping my opponent wouldn’t draw a monster. My opponent’s next draw was Treeborn frog (he cursed, I was happy). He summoned it and attacked, reducing my life points to 100). Next, I top decked Blast with Chain (fail), but Reckless Greed saved my life, as the two extra cards gave me Exarion Universe and Gene-Warped Warwolf (yes). I summoned Warwolf and crushed his frog.

Due to 1 set spell or trap, he couldn’t revive the Frog. He tried to finish me off by attacking Warwolf with Zombyra the Dark, but I used Blast with Chain on Warwolf, keeping it (and me) alive. When I attacked him directly, he used Metal Reflect Slime to defend himself. Next turn, he passed. Since I couldn’t draw and my warwolf couldn’t defeat his Slime, I passed as well. Then he got another monster and set 1 card. Next turn I summoned Exarion Universe and attacked his monster, which he defended with Power Frame. When he tried finishing me off by attacking my Exarion Universe I ended up defending my monster with exactly same trap (Power Frame). Realising I had two monsters of 2500 attack, he summoned another level 4 monster and XYZ summoned Utopia to defend himself (Utopia & the Slime).

I had my two monsters with 2500 attack and with the effect of Reckless Greed gone; I draw Exiled Force and summoned it. My opponent saw Exiled Force and panicked. I attacked Utopia twice with my 2500 beaters to bait Utopia’s negation (due to him panicking, he forgot he could allow a suicide). With no XYZ materials left, I targeted Utopia with Exiled Force, which resulted in his automatic destruction. In main phase 2, I tributed Force to destroy his Slime, together with his confidence to win. I had my two monsters with 2500 attack and he had an empty field with something over 3000 life points left. As his next top deck was a Forbidden lance with no monster to support it, he conceded. I had 100 life points and 4 cards in my deck left, but I won anyway.

With 4 wins, I ended up getting 5th place. We didn’t get those special Battle Pack cards (have they even been distributed in Europe?). But next to the 2 Battle Packs everyone got as price support, 5th to 3rd place got an extra Turbo pack booster (ooh, the new one), 2nd place got a playmat (lol, the Crow one) and 1st place got a Premium Pack tin (nice).

The Turbo Pack didn’t have much (elephant statue of disaster, Gemini Imps & preparing to intercept), but one of the price Turbo packs got me a starfoil Fabled Raven and a Rare Tour Guide from the Underworld. Win!

Next to that, due to the high amount of attendees, I was able to get some good trades. So the day ended really well.

A while ago, I stole an opponent’s Ally of Justice Decisive armor through Tragoedia’s effect, by discarding Red-Eyes Darkness Metal Dragon. My opponent looked at me with a surprised look. He looked at Tragoedia's card’s text and slapped himself on the forehead, because he “forgot Tragoedia had that effect”. If there would’ve been a rank 10 xyz out, I would’ve showed him what happens when you forget things like that.

And that’s what I wanted to talk about in this post. There are a lot of monsters out there that people use frequently, but they tend to forget certain parts of their effect. 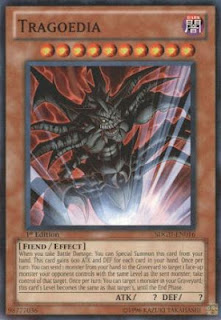 Tragoedia is the first of these monsters. Special summoning itself when receiving damage, gaining attack equal to the amount of cards in your hand x600, stealing opponent’s monsters & changing its own level are all part of his effect. It wouldn’t be the first time I see a seemingly dead Tragoedia laying around on the field, because people forgot they could use his last effect to perform an easy XYZ summon. 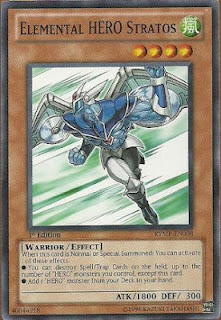 People use Stratos as a recruiter to get Elemental HERO Neos Alius, Bubbleman or god knows what else to their hand. It has happened to me that an opponent special summons Stratos (while he controls another E-Hero) and decides not to use his effect, because "all HERO monsters were already removed from the deck". Good for me he forgot about Stratos’ other effect or that Mirror Force on my side of the field wouldn’t have survived.

Thus again, the habit of using Stratos’ first effect so many times pushed my opponent to forget there was a secondary effect. 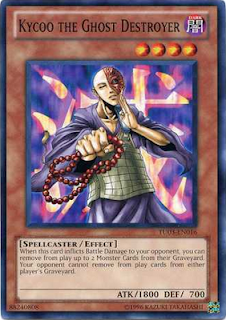 When somebody pointed out at me that Kycoo was a great tech to fight against Chaos Dragons, I looked kind of surprised. I mean, sure he can banish 2 monsters when he inflicts battle damage. But how could an 1800 attack monster stop an army of boss monsters that are so easily summoned? He then suggested I should take a look at the WHOLE card effect.

Yes, I was guilty of the same force-of-habit. I’ve used Kycoo so many times for his first effect that I forgot his secondary (continuous) effect, where the opponent cannot banish monsters. 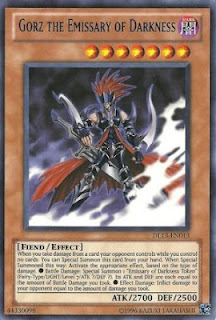 Gorz, the Emissary of Darkness

Gorz is perhaps the king of all monster cards in this category. Everyone knows his most prominent effect. While you control no cards, when your opponent attacks you, you can special summon him and summon the infamous Gorz Token (Kaien), whose attack equals the damage you just took.

Then what do people forget about him?