V Reviews - March comes in like a lion: Hello Darkness, my old friend

In anime, the Spring and Fall season are generally the best ones of each year. So when I look around for new anime to watch, I keep a closer eye to releases from these seasons, rather than summer or winter.

But while "March comes in like a Lion" wasn't directly on my radar from trailers and "top anticipated" lists, the early reviews of the season already pinned this one as a Dark Horse amongst anime. And it caught my interest since people described it as "real" and "more adult, but in a good way".

Also, the Japanese title "3-Gatsu no Lion" literally translates to "The March lion"... and let's face it. Legends (and thus also lions) are born in March #ShamelessSelfPraise.

So I started watching it. And boy, was I in for a ride on the feels. 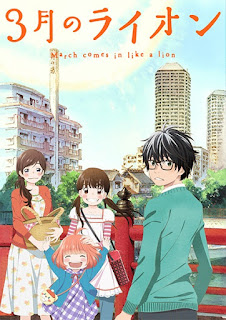 Let's start with some backstory...

March comes in like a lion is an ongoing (bi)monthly manga created by Chika Umino, who is also known for her work "Honey & Clover", as well as the characters designs for "Eden of the East".

While the mangaka tries to remain anonymous by using the pen name Chika Umino, the digital age has slipped some details on who she is.

She is born in 1980, is a fan of cats, Harry Potter & Hayao Miyazaki and she calls herself a real otaku. Her artist avatar is a female bear (with a hat!) and her pen name is a play on "Umi no Chikaku no Youenchi" (an amusement park by the sea). This is also the title of her doujin manga she created before she became a professional artist.

Her blog hasn't been updated in a while, but she is VERY active on Twitter. you can follow her @CHICAUMINO if you can read Japanese.

The manga 3-Gatsu no Lion has been serialized Young Animal since 2007 (ten years this year!), has garnered several awards (including the Osamu Tezuka award) and now finally has received both an anime adaptation AND a two Live Action films (slated for release in 2017). The first of these movies one to be seen... in March! (ba-dum-tihs).

The main story follows the daily life of the young Shogi player Rei Kiriyama. He's one of the five professional shogi player who were able to start a pro career while still being a middle school student. And now Rei is starting to live by himself to become more independent. But this is not your typical story of a "prodigy gamer" archetype who goes on a one-way trip straight to the top. This is a slow-paced drama that makes you feel every moment of his life.

This is slice-of-life done right! 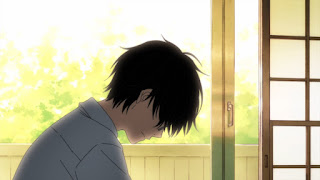 When the weight of the world forces you to hang your head.

You experience Rei's loss in the moment he lost his parents and sister in a car accident. you feel his pain when being adopted in a family where the foster mother and siblings don't want anything to do with him and are jealous of his talent. You feel his devolution as his yearning for independence slowly degrades into feelings of loneliness to the point where even he starts to wonder if this is the best path he could've taken. You feel his daily slumber when he drags himself to shogi matches, sometimes even not caring what is going to happen.
When the first episode starts, it focuses on an official match between him and his foster father, and Rei couldn't be further down the drain on an emotional level.

And from that all-time low, you see him slowly changing and opening up, due to the influence of the Kawamoto sisters... 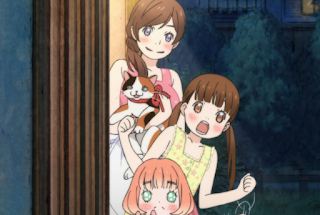 Leave your sadness at the doorstep. Only smiles allowed!

How did THAT happen? Well, one night Rei is being dragged to a night club by fellow shogi players who forced him to drink all night (don't forget, he's still a minor!). After that, he's abandoned on the street, all sickly and drunk. He is eventually found by club hostess Akari Kawamoto and is brought into her household to recover. She helps him over his hangover and allows him to stay for a while. 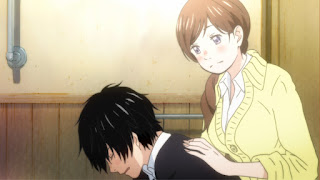 When a girl helps you over a hangover like this, she's a keeper!

After that evening, he's regularly invited (or dragged) into their household, as if he was a stray cat they were feeding. And Rei slowly accepts this unfamiliar feeling of warmth and coziness.

What follows are his slice-of-life routine of Shogi matches and his encounters with people that he HAS to interact with, even if he doesn't want to. This varies from his self-proclaimed rival, to his foster sister, to his fellow shogi players, to Gotou: the one guy this series really treats as a "villain". 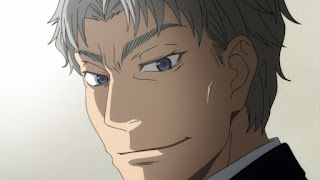 Gotou, a proper candidate for Villain of the year

But after each time Rei has an encounter he doesn't really want, he also has encounters with the Kawamoto family. And each time again you see Rei slowly become a human again. These situations vary from helping the sisters with their grandfather's candy shop, to helping Hinata confess to her crush, to just being there when the girls really need him, as if he was a big brother... or as the father figure these girls need.

Other supporting characters include Rei's step-sister, Nikaido's (stalker) butler, the Kawamoto's aunt and Rei's teacher. Though most of them only appear in a handful of episodes.

Oh my god, this anime is wonderful to look at. It's like watching a watercolor painting come to life. Yes, it takes some time getting used to the typical mouths drawn by Chica Umino. They're... weird. And yes, that is typical of her drawing style. You can see the exact same things in her previous works.

But once you get over that, it's like an orgasm of wonderful colors that meet you. During the setting of the majority of the story (fall and winter), you see and feel the cold atmosphere of the story being comforted by the warm colors of the Kawamoto family. And... and... how can you explain something like this? It's art! It's wonderful! I could keep watching this and never get bored of it.

I have to say it didn't come as a surprise that this was animated by Studio Shaft. While the head tilts are kept to a minimum (they are present, though), other typical Shaft animation tropes can be found in the anime (e.g. super detailed rooms).

On the other end: music. The music as well is very fitting for the animation and actually helps you on that wonder-train through this animation.

Oh, and did I mention the relationship this series has with the band "Bump of Chicken"? In 2014 the band released a music video for their song "Fighter", with animation of the 3-Gatsu manga. The title of the video is aptly named: "March comes in like a lion meets BUMP OF CHICKEN" and can be viewed on the Youtube Channel of Bump of Chicken. The single was also added to the 10th manga volume as a promo piece.

In return, the band performed the first Opening and End theme for the anime. But guess what the Ending was? Yes... It's Fighter! A nice nod.

If there's anything negative to say about this series, it's probably that it moves at a snail's pace. For example, the first episode takes about five minutes of Rei getting dressed and going to a Shogi match with hardly any dialogue spoken. And just before the "action" begins, we get rewarded with this gem. 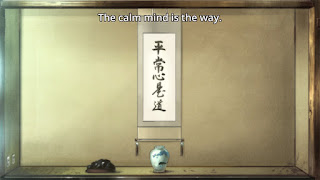 Your reward for getting to 5:47 in the first episode...

But all jokes aside, Personally I don't find it a bad thing for this anime specifically. The emotional story and combination of animation and sound are great as they are. Making it shorter or faster would only be dishonest to the story that is written. But I can understand if the slow pacing is off-puting for somebody looking for something a little more "flashier".

So if "something flashier" IS what you are looking for, you are at the wrong address here. This is not an anime for you.

However, if you do want to take place on this feel-train, I will gladly let you on board. While it may not have been nominated for best anime of 2016, it sure is my personal favorite.

This anime is a wonderful anime that requires your time, but rewards you with a deep story and great animation. I'm giving it a 9/10.

Yes, I'm reviewing it before it finishes airing. It's a great series that deserves your attention! Go watch it!

Also, having caught up with the manga, I can only hope that a second season gets greenlit. Because trust me, the story is only going to get better after this (so cross your fingers!).

That's it for now. Until next time, V out.