Well, 2016 has come to an end. And with Yu-Gi-Oh being more boring than ever before (a game lasting longer than 3 turns is considered a "long" game), I wanted to go back to reviewing anime that I've seen in the past year. And while there have been some great series lately, there are also a few turds.

But before reviewing any of the series I've seen, first off I wanted to talk a little about the Crunchyroll Anime Awards.

While I can applaud Crunchyroll for doing an "awards" show of sorts for anime, it's clearly still a work in progress. I realize that an awards show will always disappoint a lot of people. But the results of the voting already show a few of the big flaws this first edition has.

We put way too much money into advertising this anime, so it MUST be nominated as much as possible: Kabaneri

One of the bigger "flops" of the past year was Kabaneri of the Iron Fortress.

Okay, okay, I admit... Flop IS a big word for it. Disappointing is a more accurate word. Its animation and art style is overall very amazing and the first few episodes were amazing spectacles. But halfway through the main character we were rooting for (Mumei) becomes a damsel in distress and a generic textbook villain is pasted into the series to add a form of suspense. The end result left most people somewhere in the middle. Some kept defending it, while a lot of others simply hated what happened to it.

But Crunchyroll has put a lot of money into the promotion of this anime over the past year, so it obviously had to be nominated in every category it could somewhat fit in... even if it doesn't make any sense.

Dude... Seriously? Is this a joke?

Obvious result of this is a lot of raised eyebrows among anime fans, and obviously: 0 actual rewards being reaped. But on Crunchyroll's behalf, it got people talking about it once more and maybe a few views which returns some lost revenue for them.

The latest hype train wins everything: Yuri on Ice

First off, I have nothing against Yuri on Ice. I am not the target audience for it, so I'm not going to watch or review it. But unless you've been living under a rock the past months, you must've at least heard of the hype train surrounding Yuri on Ice (further abbreviated as YOI, not to be mistaken with yaoi).

YOI is an anime about guys doing competitive figure skating. And if that premise sounds gay, that's because it is... and there's nothing wrong with that. But somewhere halfway, all shipping girls finally saw their ship set sail with "the kiss" and the hype went apenuts.

If these awards were done half a year ago, most nominations would've gone to Re:Zero, since that was thé hype anime at that moment. But fall season was mostly YOI's hype train, so that's the anime with the most nominations.

Though, let's admit: no all of its nominations were that deserving. 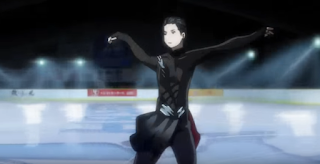 "Yeah, the ice skating animation is so amazing to watch!"

But the reality of things is that, no matter the category it was nominated for, YOI wins the award. Best Couple, most heartwarming scene, best kiss, best OP and ED, Best iced Yuri, Best cucumber party, best anything... If Yuri on Ice was nominated, it would win the award. That's the obvious result of having a big audience vote in your categories. The anime with the biggest hype wins automatically, whether the anime deserves the hype or not.

Somebody who has some experience with quality award shows immediately realizes something is off about these awards. The categories are too general.

For example: You could have a big range of music awards, but the only things awarded here are opening and ending theme. Really? Where is the award for composer? For the entire Soundtrack? For most effective song used?

Another one: Where are awards for best director? Best composer? Best character design? Where are the typical industry awards?

Heck, even some general categories are missing. Yes, there is a best boy/girl category, and best hero/villain category. But where's the best voice actor/actress? Best main character/supporting character?

And really, Crunchyroll. You are the one platform that could award people who do some really underappreciated work. You could have the award for best English dub / voice actors. Voice actors in Japan are celebrities, but in the rest of the world it's a job with little appreciation.

Obvious result: The salt is real

It's no surprise that the anime community was throwing up heaps of salt over the eventual results. Most of them threw in their five cents on who should've won instead; whether serious or for the lolz (like Gigguk's awards).

I wanted to throw in my salt and my awards too at first, until I saw the Under the Scope awards the past weekend. Most anime reviewers had some choices that were questionable, but his choices... I have to admit: I was impressed. He added multiple categories and had sufficient arguments for all of his choices. My initial reaction after I've seen his video, was clapping slowly with a satisfied face.

Watch it via this link. Seriously.

So Crunchyroll, if you want some advice on a next edition of your Awards ceremony, watch UTS's anime awards and learn some lessons from it.

Also, another tip: seven judges only? Really? While I can see certain judges were chosen (like the Boondocks director and GlassReflection), many other valid voices remain unheard.

So in short: Great initiative, but many lessons that need to be learned for the next edition.

Now, onto the reviews...

Until then, V out.