V's thoughts on the Academy Awards Nominations - Your Name got snubbed!

Yesterday, the nominations for the Oscars were published. And as usual, it quickly becomes a topic of discussion. Yes, for the first time in a few years, the oscars aren't pure white (*sigh* let's hope that's now over).

Also, fanboys aren't that happy that Deadpool didn't get a single nomination, not even for effects or costumes. And that while Suicide Squad DID get a nomination (for make-up and costumes). Err, okay?

But while I'm not a die-hard cinema-fanboy (and thus haven't seen much of the films nominated), there is the topic of animation where I come to put my two cents. 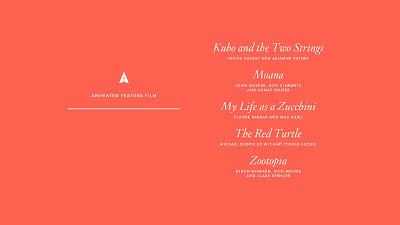 The following three anime films were also submitted for the Animated Feature Film category, but they did not receive a nomination (i.o.w. the snubs):

A: Being submitted doesn't mean that much if you keep in mind that animated movies like the "Angry Birds movie" were also submitted for best animated feature this year (*gee, I wonder why that wasn't selected*).

B: Miss Hokusai's submission is weird, since it's a 2015 movie. For some reason it's only now being submitted for awards (it did end the short list of the 2017 Annie awards and Satellite awards).

C: Your Name being snubbed is a real sad thing. The movie has garnered wide acclaim from everyone that has seen it, and I really (REALLY)! want it to get screenings over here in Belgium as well (silent grumble). It not getting a nomination isn't going to help, sadly enough.

D: Well, how do I put this... Why is the Red Turtle being tagged as a Ghibli film?

The Red Turtle: A Ghibli film???

The Red Turtle was a title that surprised me in more than one way. Most notably because news outlet keep attaching the name Studio Ghibli to it and when looking up some details, "Belgium" was tagged as where part of its production process was done (wait, WHAT???!!!)

But digging a little deeper quickly showed the truth. Dutch director Michaël Dudok de Wit (known for his Oscar for best short feature "Father and Daughter") went and convinced both Hayao Miyazaki and producer Toshio Suzuki (and thus by extension Studio Ghibli) to Co-Produce this film.

So while the name of Suzuki and Studio Ghibli are attached to this movie and said studio may have had some influence over the production process and visual aesthetic, they didn't actually animate this movie. In the end, all animation was done in Europe.

I might buy this movie when it appears on our shelves, just to see how much influence Suzuki/Ghibli had on the end result (if any at all).

So who is going to win best animated feature?

From this selection, I would personally love to see Kubo and the Two Strings win. Studio Laika has been making great movies time after time, but Kubo wasn't really the box office success they had hoped it would be. Rumors go that if Kubo wasn't a big success, the studio might even shut down (please don't let that happen!). So basically, winning the Oscar would be a good thing to happen for the continued existence of Studio Laika.

But that is just me hoping. Realistically, the two biggest contenders are Zootopia and My Life as a Zucchini. Zootopia has won the Golden Globe already, while Zucchini has won the Satellite Award (and has garnered other praise internationally).

But given the Oscar judges' track record on their careful analysis of animated features (or better: lack thereof), the statue is probably just going the most favored/American movie (in this case: Zootopia).

This category is always an ignored one (not that many people pay attention to short films). Also, while there was a flooding of short films submitted for this category (70!), not a single anime short made it to the short-list (for the third year in a row).

And from the shortlist, eventually these animated shorts are nominated:

I can't give arguments for which is better, since I haven't seen most of them (same goes to you, probably). But if there's a film festival near you, you might want to check the short film section for any of these. Go watch them if you have the chance. Short films are way too underappreciated.


Well, that's all I can say on the subject.

Email ThisBlogThis!Share to TwitterShare to FacebookShare to Pinterest
Labels: Academy awards, Kubo and the two strings, My life as a zucchini, oscars, short films, The Red Turtle, V's thoughts, Your Name, Zootopia